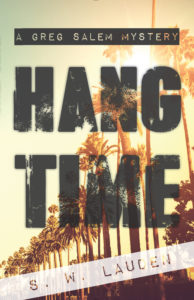 AVAILABLE FOR PRE-ORDER! Touring in a band is murder. Or is it suicide? After narrowly surviving a hellish season with a murderous drug kingpin, Greg Salem and his sidekick/drummer are back at home in The Bay Cities. A tour looms for their infamous punk band, Bad Citizen Corporation, but first Salem & Associates must wrap up a jealous husband case tied to a cheating hip-hop bombshell. BCC plays a warm up show when a dead body turns up in their dressing room―the first of many during this ill-fated reunion.

The final book in the Greg Salem trilogy, Hang Time, brings together the colorful cast of characters from Bad Citizen Corporation and Grizzly Season in a thrilling and atmospheric series finale fueled by sex, drugs, backstabbing band mates, cheating spouses and vicious cops.

“Lauden’s prose zooms along with an arch energy, and the final installment in his Greg Salem trilogy keeps the plot twists coming at warp speed.” Full review.

“The twists, turns, and shocks are enough to leave the reader gasping for more.”

“As a rock journalist in my spare time I know the scene pretty well and Mr. Lauden just manages to convey so well how it is and feels, it’s impressive. Awesome, awesome stuff.”

Owen Laukkanen, author of “The Professionals” and “Criminal Enterprise”

“As savage, fast-paced and bleakly comic as your favorite punk rock anthem, S.W. Lauden’s HANG TIME is a wicked and fitting finale to a first-rate trilogy, packed full of both sex and violence of the no-holds-barred variety, and building to a gut-punch conclusion that’ll leave you reeling long after you’ve closed the last page.” —Owen Laukkanen, author of THE PROFESSIONALS and CRIMINAL ENTERPRISE

“Addiction, isolation, punk rock and murder — all on a hot mic.”