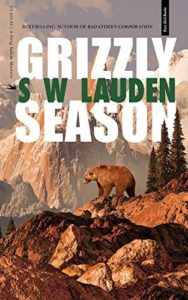 Former Los Angeles police officer Greg Salem and his sidekick Marco escape to a remote cabin in the backend of the Angeles National Forest, only to have their peaceful retreat upturned after stumbling across the marijuana farm operation called Grizzly Flats.

“Between thrilling action, a terribly interesting protagonist, fascinating and terrifying villains, and an extremely well-drawn supporting cast…GRIZZLY SEASON delivers in a big way. Big action, big guns, lots of blood spilled, sex, drugs…all of the fun shit. On top of that, you gain a better perspective of Salem and leave dying to know what happens next. It’s everything you want the middle of a trilogy to be.”—Matt Morgan

“GRIZZLY SEASON isn’t a novel about the drug trade. It is a novel about American drug paranoia. Magnus Ursus is a boogeyman hellbent on either indoctrinating young minds or destroying them with his new, demented, hypertoxic drug. He inspires the kind of terror that keeps concerned mothers up at night.”—Benoit Lelievre

Out of the Gutter

Highly Recommended: “GRIZZLY SEASON offers readers the perfect mix of sex, drugs, and (punk) rock-n-roll, but also infuses it with heart, heart-break, and most importantly, a poet’s touch. Lauden offers so much more than a standard PI read, he offers up a raw, gritty picture of the life of the PI, warts and all.”—Derrick Horodyski

“To Lauden’s credit, he doesn’t make it easy for Salem, even allowing for some rather serious failure along the way—failure that’s not merely there as a setup for Salem to bounce back from, but that can’t be undone and which will fundamentally (re)shape Salem moving forward. Fortunately, Salem is in Lauden’s very capable hands, making this a series you’ll definitely want to keep up with.”—Elizabeth A. White